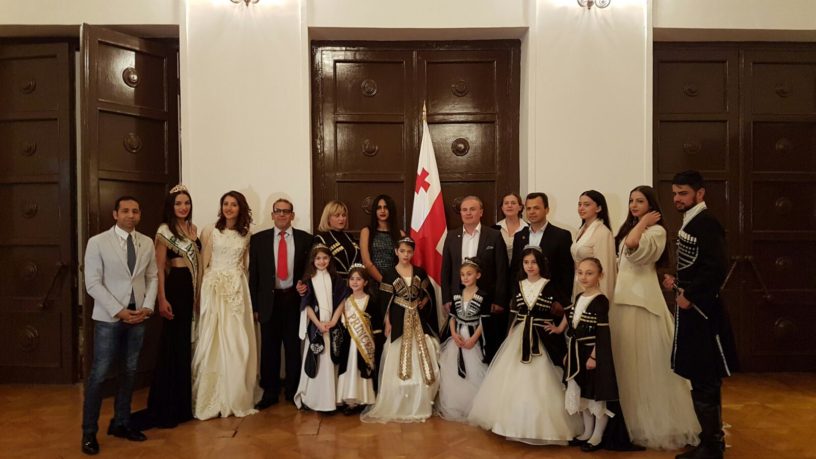 By SATUC   |   July 23, 2017
Leave a comment
Sheikha Al Thani officially invited and attended the opening ceremony of the world martial arts games in Batumi as an honoured special guest. The World Martial Arts Festival was held in Batumi, Georgia from 21st to the 23rd July 2017. Princess Sheikha was attended as a special guest over the three days. She met at Batumi airport by the Georgian Karate Federation president, where she was interviewed by Rustavi TV Official Georgian Channel, Batumi TV and Adjara TV where a press conference was held on her arrival. The official ceremony of the games was held at the Euphoria Hotel in Batumi on Saturday 22nd July was the Mayor of Batumi, the Sports Department Chief, The Minister for Tourism, the Batumi Sports Minister, the Georgian Karate federation president, and various other important Government officials were in attendance. Included in her schedule are visits to a local cancer hospital and to various schools for underprivileged children. The children were welcoming Sheikha at her arrival at the Batumi airport. Sheikha received an official position of vice president of the Georgian national karate federation and an award was presented to the Sheikha. she was also as a special guest at the Georgia fashion week in Batumi 2017. The president of the Georgian national karate federation privately trains the Sheikha during her official visit. Sheikha Al Thani met the ministry of youth and sports and the chairman of the supreme council hosted the Sheikha Al Thani during her visit, at the introductory meeting, the parties focused on sporting events, which are planned to implement the SATUC world cup in Georgia, in particular, in Adjara, they signed of the protocol between SATUC and the Adjara government Mr. Lasha Chaveshvili sports department chief at the same day, Sheikha had a meeting with representatives of the ministry of education, culture and sport of Adjara, at the bilateral meeting, the sides discussed plans to be implemented in the future. the conversation touched upon the potential of tourism and prospects in Adjara, at the meeting, it was planned to organize football international championship among children in Adjara. the vice minister of sport and youth awarded Sheikha Al Thani a token of gratitude after their discussions on potential ways to help youth in the area through sports. During Sheikha visite, she not forgot to visit the Batumi maternal and child central hospital and met Mrs Tamara bakhtadze, the hospital medical director. there she was greeted with professional doctors who truly cared about their patients and she was touched by how although the children were in pain, they all knew how to smile and tease each other’s hardships. The national TV (Adjara tv) interviewed Sheikha where she expressed her happiness at being invited to Georgia once again. Rustavi tv official Georgian channel Batumi tv ajaratv.ge interview with the Sheikha during the opening ceremony. Watch Sheikha Althani discusses future cooperation with the Chairman of the Georgian Supreme Council The officials who greeted Sheikha Al Thani. HRH Sheikha Al-Thani also visited Batumi for the World Martial Arts Games in 2016 As a Special Guest and to discuss SATUC World Cup. She arrived early to Tbilisi International Airport to be greeted by a welcome party of assorted officials and girls in traditional dress bearing flowers and gifts. Among the official’s present were Mr Kakha Basilia, Vice Minister for Sport, Mr Grigol. the President of the Georgian Karate Federation, Gabi Michaeli, Vice President of the World Martial Arts Confederation and Mrs Tata Klonina, Ministry of Tourism. A short press conference was held with HRH expressing her honour at being invited to the event and pleasure to be in Georgia. She also highlighted the efforts of SATUC to use sport as a tool for unification and to aid those less fortunate. She also met with many prominent businessmen who agreed on the importance of sport. During the meeting, HRH was presented with a gift of a gold antique bracelet.