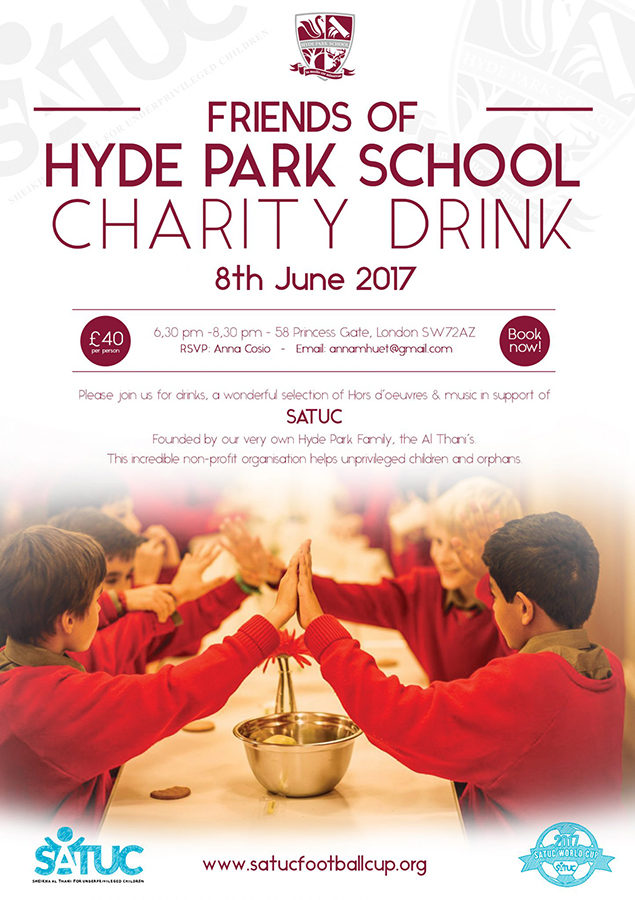 By SATUC   |   May 24, 2017
Leave a comment
Hyde Park School principal, Hilary Wyatt, and Friends of Hyde Park School Charity Drinks, have decided to organize a fair at Imperial College London to support SATUC.

The Hyde Park School Principal expressed her admiration for the creative ideas of Sheikha and the activities carried out through her Charitable Organization SATUC in order to support underprivileged children and organize the World Cup for Orphans as one of SATUC projects. Thereupon, the Hyde Park School principal, Hilary Wyatt, and Friends of Hyde Park School Charity Drinks, decided to organize a fair at Imperial College London, to support SATUC in view of serving the underprivileged categories and innovating projects to improve their present and future life. In an interview with the Hyde park school children, Sheikha Al-Thani called them to perform charitable activities to promote equality, support the needy and increase their opportunities for realizing success. President of SATUC Sheikha/ sheikha Althani and her brother Sultan Al thani, went to talk to young kids at Hyde Park school London, where Sultan is studying, about her charity. Her talk included many important issues that children must understand such as the importance of having a goal or a dream, even at a young age. Sheikha Al Thani told her story about how she started doing charity work since she was 4 and one of the kids was shocked and asked how and she replied because I wanted to and I had support. Her mother was her support. She then went on to explain the importance of mothers and how every child must always treat their parents well, no matter what. The moral of her talk to the children is that no one should be put down or pushed away from his goals or dreams because of his age because the new generations are always the ones who will move society forward. They are the generation of hope and purity and no one should take that away. This initiative is truly a unique experience, especially in the United Kingdom. It represents a perspective deserving generalization, especially as a way to implant the concept of charitable work in the mind of school children and to strengthen their relationship with their communities and teach them the need to contribute to their welfare since an early age, and in particular during their elementary school years. SATUC deems that such initiatives should really find their way to our societies in the Middle East. The innovative idea of the Principal of Hyde park Elementary School should be seen as a gleaming example to be widely applied and keenly propagated in the Arab countries, and a culture to be implanted in the mind and heart of our children who will carry the responsibility of reconstructing and developing their nations in the future. We send many thanks to Hyde Park School London principal Hilary Wyatt, Friends of Hyde Park School Charity Drinks and Mrs Anna Cosio, a supporter partner for SATUC. We could not have done it without your help – thank you so much for helping all the children and making such a difference to these children’s lives. All monies raised at this event will go to helping those children. Seating is limited, so please book your place now! Do not wait.
Share