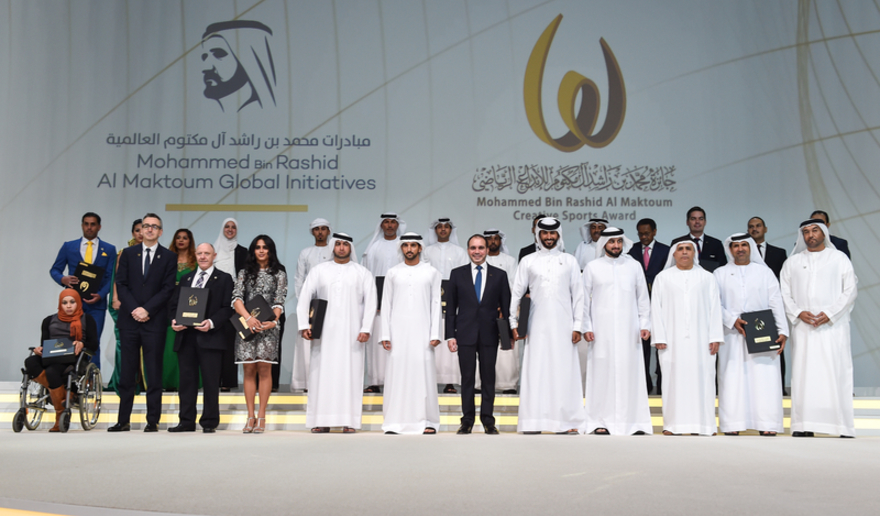 By SATUC   |   January 17, 2017
Leave a comment
DUBAI 9th January 2017, SATUC headed by H.H. Sheikha Al-Thani, won the award for being a great charitable foundation, not solely through the sporting successes, the organization has helped to realise, but also for work in all charitable social aspects. Of course, some of our children have even been signed to football clubs due to our work, and we continue to fight to change the lives of our children. The Award, which is affiliated into “Mohammed Bin Rashid Al-Maktoum Global Initiatives”, is the greatest of its kind all over the world with respect to its various categories & financial rewards and the first of its kind ever that deals with creativity in sports work in UAE, Arab World and the entire world. The Award is the world’s leading award in terms of value, and diversity of categories. The winners’ list comprises local & Arab sports leaders, athletes, coaches, referees and other sports figures who serve in the local, Arab & world sports fields. The winners of the 8th Edition of the Award were rewarded in a prestigious awarding ceremony, held on Monday afternoon at Dubai World Trade Center in the presence of H.H. Sheikh Ahmed Bin Saeed Al-Maktoum, President of Dubai Civil Aviation Authority & Chairman of Emirates Group / H.H. Princess Haya Bint Al-Hussain, the Wife of H.H. Sheikh Mohammed Bin Rashid Al-Maktoum, the Vice President & Prime Minister of UAE and Ruler of Dubai. The awarding ceremony was also attended by H.H. Sheikh Hasher Bin Maktoum Al-Maktoum, Director General of Dubai Dept. of Information & President of the UAE Tennis Association / Sheikh Saeed Bin Maktoum Bin Juma Al-Maktoum / H.E. Mater Al-Tayer, the Deputy President of DSC / several official persons in the sports sector. The awarding ceremony was inaugurated with recitation for the UAE National Anthem, followed by a short film on the Award. H.H. Prince Ali Bin Al-Hussain, the President of Jordon Football Association and West Asia Football Federation, presented a brief speech expressing his pleasure to win this prestigious Award, which holds the name of H.H. Sheikh Mohammed Bin Rashid Al-Maktoum, the Vice President & Prime Minister of UAE and Ruler of Dubai, who is considered as a model for creativity in all fields. He remarked: “The Award motivates all sportspersons to attain excellence and to keep on the track of distinction”. H.H. Sheikh Hamdan Bin Rashid Al-Maktoum, the Deputy Ruler of Dubai & Minister of Finance, has been named as the Local Sportsperson for his great efforts to boost the sports movement during her presidency for Al-Nasr Club beside his support to Hatta Club, marine sports, equestrian & camel sports and disabled category. The award was received by H.H. Sheikh Rashid Bin Hamdan Bin Rashid Al-Maktoum, the President of Al-Nasr Football Co., on behalf of his Father, H.H. Sheikh Hamdan Bin Rashid Al-Maktoum. H.H. Prince Ali Bin Al-Hussain, the President of Jordon Football Association and West Asia Football Federation, has been named as the Arab Sportsperson for his eminent role to lead the change movement & combat corruption in FIFA, besides his permanent demands to implement transparency in FIFA’s works to ensure world football prosperity, whether during the period of assuming the Deputy Chairmanship of FIFA or during his election campaign to assume the presidency of FIFA. H.H. Prince Ali Bin Al-Hussain deserves the reward of this category toward his utmost efforts to develop the Jordanian football when he was assuming the presidency of Jordon Football Association, during which Jordan has attained several achievements, the latest of which was the hosting of the FIFA U–17 Women’s World Cup Jordon 2016 in addition to his efforts to enhance football work in West Asia. The Royal Endurance Team of Bahrain has been rewarded the Arab Team Award For winning distinctive rewards from the International Equestrian Federation in Juniors Endurance World Cup – Chile 2015. The reward was received by H.H. Sheikh Naser Bin Hamad Al-Khalifa. H.H. Sheikha Sheikha Al-Thani received the Arab Corporation Medal, which is rewarded to Sheikha Al-Thani Foundation in Egypt for its unique humanitarian initiatives; the most eminent of which is the organization of the Orphan & Deprived Children World Cup, besides finding means to cohere orphans & deprived children in the community. H.H. Sheikh Ahmed Bin Mohammed Bin Rashid Al-Maktoum, the President of the National Olympic Committee & Chairman of the Award, has awarded winners of the other categories of Naser Mohammed Ali Al-Tamimi – UAE: Toward his distinctive administrative efforts & eminent role as Board Member & Financial Secretary for the International Judo Federation since 2007 and up to date. He is presenting vital roles to develop Judo sport all over the world. SATUC is very pleased to be recognized for all the work we do for the orphaned and disadvantaged children of the world, but mostly to be among so many worthy winners who are not just hard-working, but beacons of hope to those in need; this award is for them. Furthermore, it is for everyone from our wonderful ambassadors, to our volunteers, and to everyone who has donated even the smallest amount to help the children for whom we care so much.   http://www.asoif.com/news/hh-sheikh-hamdan-bin-mohammed-awards-winners-8th-%E2%80%9Chh-sheikh-mohammed-bin-rashid-al-maktoum   http://aroundtherings.com/site/A__58644/Title__8th-HHSheikh-Mohammed-Bin-Rashid-Al-Maktoum-Creative-Sports-Award-Winners-Announced/292/Articles   https://twitter.com/mbraward?lang=en   https://twitter.com/mbraward?lang=en