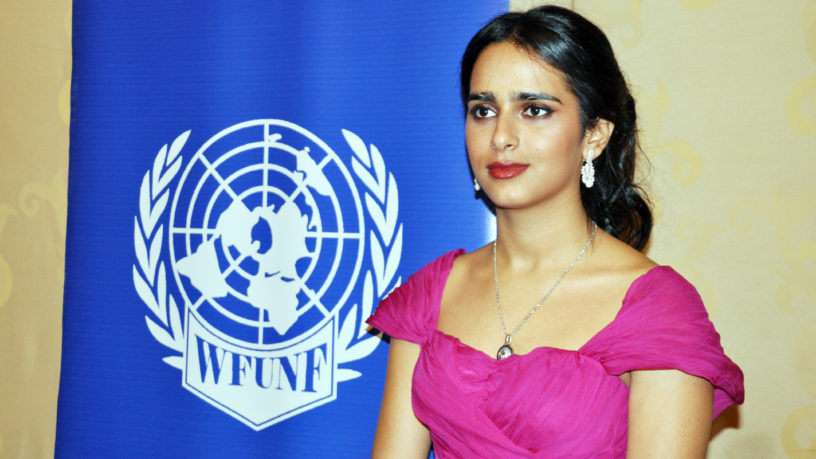 By SATUC   |   December 25, 2016
Leave a comment
In the grand event that took place on Friday 23rd of December 2016 in The Nile Ritz Carlton in Cairo. Sheikha Sheikha Althani president of SATUC got awarded by WFUNF due to her winning the Sheikh Mohamed Bin Rashid Al Maktoum Creative Sports Award who is run by Sheikh Hamdan and his brother Sheikh Ahmad Bin Mohammed Bin Rashid Al Maktoum. The Sheikha will receive the award on the 9th of January in the New year in the Dubai World Trade Centre. SATUC Charity under the leadership of Sheikha Sheikha Althani revived the award for the role that the charity place in act of aiding underprivileged children around the world and her unique idea of setting up a World Cup for orphans. This takes place every two years to help more children. The first ever SATUC World Cup took place in Egypt in 2015. Sheikha Sheikha expressed her happiness with being awarded alongside many great and influential Arab individuals who play various roles in different sections of society whether it be humanitarian or sports, education, health, the role of women, children in this great event. From the ambassadors and people being awarded was the goodwill ambassador Yasser El Sherif who worked in volunteering in the health section and the ambassador Zaheer Monkal the Secretary General of the International Organisation for Development and Human Rights in Washington ,Dr. Gameela Abdelaziz, Dr Eidalrahman Al Gahny, Dr Aref Katby, Dr Hamza Khawgah and Dr Mesfer Al Kareea from the Kingdom of Saudi Arabia. Dr. Ayman Wahdan the official representative of the World Federation of Friends of the United Nations, the Middle East and North Africa also praised the awarded attendees for their serious roles and their impressive work in the aid of society which is sure to make a positive impact and will treat many of the negative social issues we face today. He stated that the role of the Ambassador Sheikha Althani is big one and never ceases to impress many through the work of her charity and the projects that she works on. He added that her winning the Sheikh Mohamed Bin Rashid Al Maktoum Creative Sports Award shows how much hard work she puts in to serve humanity and her work with the underprivileged children in the Middle East and the world.
Share