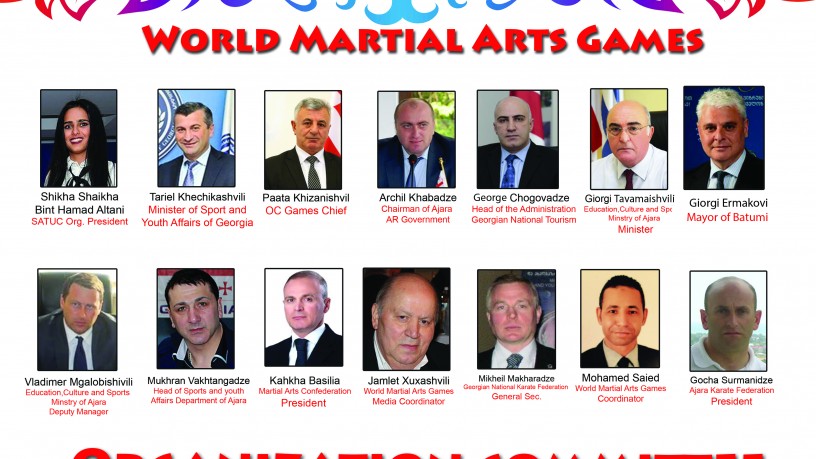 By SATUC   |   May 20, 2016
Leave a comment
A press release concerning the attendance of Sheikha Sheikha Al-Thani for the opening of the First World Combat Games 2016 in Batumi Sheikha Sheikha Al Thani is attending the opening of the First World Combat Games 2016 in Batumi as the guest of honor for the tournament that will be attended by President of Georgia, Mr. Giorgi Margvelashvili. The World Combat Games are an international multi-sport event featuring combat sports and martial arts. Fifteen Olympic and non-Olympic sports are currently on the program: aikido, boxing, fencing, judo, ju-jitsu, karate, kendo, kickboxing, Muay Thai, sambo, savate, sumo, taekwondo, wrestling and wushu. It will be held in the tourist city of Batumi from 19 to 22 May 2016. Mr. Mohammed Said Hassan, Coordinator of the tournament, said that the visit of Sheikha Sheikha Al-Thani is well appreciated by the State of Georgia for her great efforts in supporting underprivileged children around the world through sports. It’s worth mentioning that Georgia is one of the countries that will participate in SATUC World Cup for Orphans 2017. A press conference will be held upon the arrival of Sheikha Sheikha Al-Thani to the capital Tbilisi, which will be attended by Sports Minister and the Mayor of the capital and the Minister of Tourism. Another conference will be held in Hilton Batumi for the guest of honor and several ministers in Georgia. Sheikha Sheikha Al-Thani expressed her happiness to attend this international event and thanked the Georgian president and the Georgian government for inviting her to the event. Sheikha also thanked all supporters and sponsors of the event held in the touristic city of Batumi. Sheikha is also looking forward to meeting the Georgian team participating in the SATUC World Cup for Orphans in 2017. She called members of the team to do their best during the competition and thanked the Georgian president and government for supporting the Georgian team participating in SATUC World Cup for Orphans organized by SATUC foundation and Sheikha Sheikha bint Hamad Al Thani.
Share