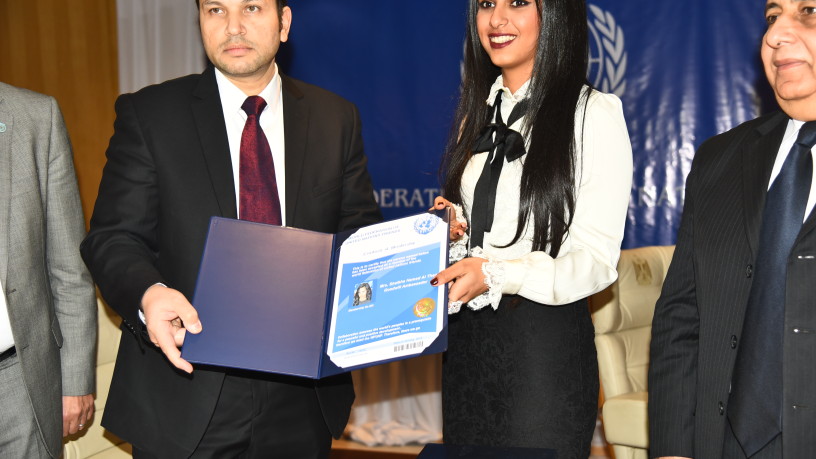 By SATUC   |   January 18, 2016
Leave a comment
https://www.youtube.com/watch?v=DoL1v6xm2Gs   World Federation of United Nations Friends (WFUNF) named Sheika Al-Thani a goodwill ambassador and gave her an honorary doctorate at an award ceremony held in Sharm Elsheikh. WFUNF honored a number of prominent Arab personalities whom are considered the most influential in the Arab world through their fruitful efforts and projects which have contributed to human development and renaissance of the Arab peoples. Among them was Sheikha Al Thani, Chairman of SATUC Foundation who invented the idea of the orphans’ World Cup. Sheikha was honored for her role in serving children’s issues in the Arab world. She was honored by Dr. Ayman Wahdan, regional president of the federation in the Middle East. The celebration was also attended by Maj. General Hisham Al-Halabi, and Maj. General Mohammed Zakaria who praised Shiekha’s efforts to help the orphaned children. Sheikha was granted an honorary doctorate and was named WFUNF Goodwill Ambassador for her great efforts in serving the orphaned children. WFUNF agreed to carry out common projects for the orphaned children with her. Sheikha’s role in helping those children was well-appreciation by the Federation just like it was appreciated by all Arab countries. This came as reward for the unlimited effort exerted by Sheikha in serving humanitarian issues, particularly orphaned children, since her early childhood. She believed that supporting the orphaned children and relieving their pain is a national duty. She used sports to help the orphaned children in a dedicated tournament. Sheikha Al-Thani was admired in all Arab countries and is still working to put a smile on the faces of countless children. This year, Sheikha offered a new project that is different from all her previous projects. With new humanitarian vision targeting the community, she offers safe environment for the children. We have a diverse mix of people all working to coexist. They learn that ideas and aspirations only matter and not their appearance or affiliation. Helping the talent athletes among those children makes them forget their sufferings. Children with difficulties in life became Sheikha’s target. She really believes that sports are able to solve their problems and heal their souls. She gave a helping hand to those children to overcome their problems as talented young people with unique gifts. Sheikha Al Thani focused on children who suffer from difficulties in life including orphans, poor and disintegrated families. She believes that each one of them have special gifts that should be cared for. Such gifts are able to take them out of darkness. This is such a good chance for them to overcome their difficulties and prove their talents and capabilities to the world. Sheikha al-Thani was able to overcome many challenges and make history by helping those children. Many people believed in her and started working for helping those children in order to offer them better future. On the other hand, Sheikha al-Thani expressed her happiness for naming her a goodwill ambassador and gave her an honorary doctorate saying, “I can only find happiness when I see smiles on the faces of children. Yet, they demand very little. I work hard to send a message to the whole world that a smile on the face of an orphaned child after winning 1st place in a tournament is much better than winning wars and shedding blood!”