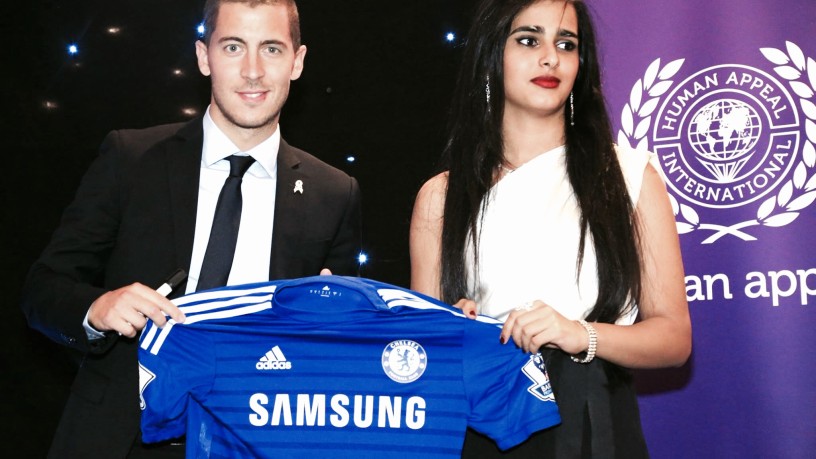 By SATUC   |   June 25, 2015
Leave a comment
Sheikha Al Thani, founder of the SATUC World Cup, the international 6-a-side football tournament for refugees, orphans and disadvantaged young people, spoke about her exciting new project to some of the biggest names in football when she addressed those present at the Human Appeal Celebrity Football Gala Dinner in London on Monday.
The event at the Marriott Hotel, which was part organised by former West Ham, Newcastle and Chelsea striker Demba Ba and raised funds to support street children in his home country of Senegal, was attended by current Chelsea stars Eden Hazard, John Terry and Branislav Ivanovic.
Others at the dinner included former Chelsea striker Samuel Eto’o, Arsenal’s Abou Diaby and football freestyler and choreographer Colin Nell.
During the fundraising auction Sheikha successfully bid for Eden Hazard’s signed shirt and when she was presented with it by the PFA Footballer of the Year himself, she immediately pledged to donate it to be re-auctioned later in the summer to raise funds for the children who take part in the SATUC World Cup.
Sheikha, who talked to the BBC about the SATUC World Cup when she was a studio guest on BBC Radio 5 Live’s Stephen Nolan show on Sunday evening, was also given the opportunity to address the distinguished audience and tell them about the aims of her event.
She was especially pleased that she also had a chance to talk with all the players about this exciting new global tournament and that so many of them responded with such interest and. Following on from these conversations we hope to announce soon the name of a VERY exciting new tournament ambassador in the near future – we will keep you posted!
“I have no doubt that the children around the world striving to take part in the SATUC World Cup, will be even more motivated to do well when they know that so many world class players, who have often overcome major obstacles themselves in order to reach their goals and this level of success, are now aware of this tournament and their situations.’’
Sheikha ended her speech by expressing her hope that the SATUC World Cup will unearth future footballing stars who one day will be able to stand on the same stage, and like Eden Hazard, John Terry, Demba Ba and co, be able to use their success and influence to help donate to worthy causes.
[Best_Wordpress_Gallery id=”3″ gal_title=”Sheikha with Chelsea footballing stars”]
Share