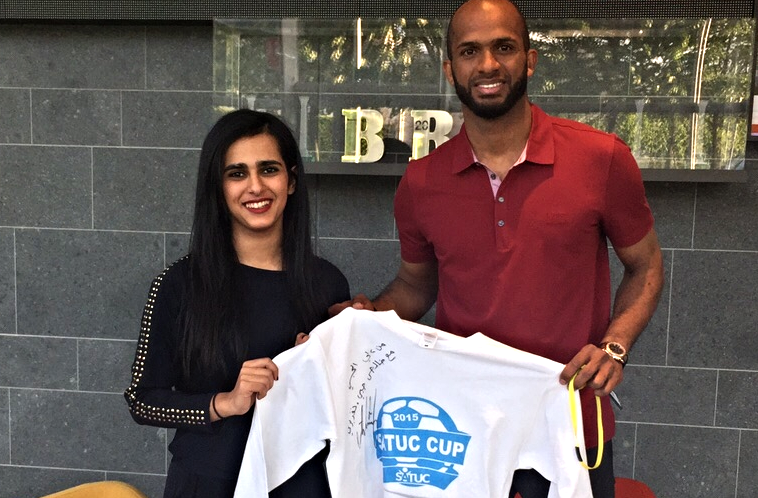 By SATUC   |   May 12, 2015
Leave a comment
On Friday of last week, Oman captain, Wigan goalkeeper and former Premier League hero Ali Al-Habsi met with Sheikha in London to discuss his participation at the 2015 SATUC World Cup as a tournament ambassador. As a current player Ali has been very busy recently with the end of his campaign for Wigan and so has come to meet Sheikha as soon as he possibly could.

Ali told Sheikha how delighted he was to be chosen for such a role since charity is an important aspect of his life – any project that combines his love of football and his love of helping those less fortunate than him is a very worthwhile endeavour for him; for this reason Ali explained how privileged he feels to be part of such a worthwhile project. Ali Al-Habsi promised he would be there in spirit and would be rooting for the children throughout. He also told Sheikha that if there is anything he could do for SATUC or the children in the run-up to the tournament he would do his hardest to achieve this. SATUC is very pleased to receive such an offer of support and help from such a popular, well-respected and professional role model as Ali Al-Habsi who will undoubtedly be a great asset to the children and the tournament as well. Though he can’t be there in person for the tournament, we know Ali will be a huge source of help and advice to us as we continue to make preparations for the tournament’s kick-off.
Share