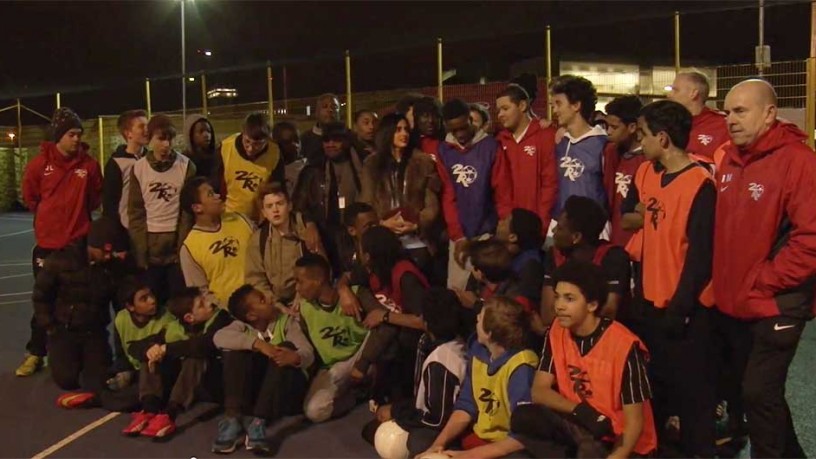 By SATUC   |   March 7, 2015
Leave a comment
Sheikha Al-Thani, founder of SATUC, was yesterday invited to attend one of 2 Touch Rulz’ weekly Turn Up & Play tournaments which take place every Thursday. Designed to engage kids of all ages from around the area, Turn Up and Play is a free and voluntary programme, running since May 2014, which keeps the children busy through a fun and healthy activity and stops them from getting bored and straying into trouble. 2TR has ambitious plans to extend the programme throughout all of London and eventually as a blueprint for the whole of the UK; judging by its popularity so far there is every chance they will be successful and we at SATUC wish them all the best with this extremely worthwhile endeavour. Yesterday’s tournament was sponsored by Camden Council – thus the Mayor of Camden was in attendance as well as a handful of local journalists and filmmakers. https://www.youtube.com/watch?v=WYJ_yQ4dR_Y Sheikha and the rest of the SATUC team were also present, with Sheikha handing out the medals to the winning team of this week’s tournament. It was important for both SATUC and 2TR that Sheikha was present; the two organisations enjoy a very close and fruitful partnership and Sheikha’s involvement yesterday cemented these ties even further. Sheikha was also there in a more official capacity, namely to explain to the children and the mayor a bit more about SATUC’s background and the kind of work the charity does. But perhaps the most pressing topic on Sheikha’s agenda was the upcoming 2015 SATUC Cup taking place in Cairo later this year in August. The 6-a-side tournament will host teams from all around the world made up of underprivileged and socially disadvantaged 14-15 year olds. SATUC is working with a partner charity from every country represented at the tournament to send over a team – England is one such country, and the charity of course, 2TR. 2TR will therefore be holding a series of trials in the coming weeks to select their team of 8 for the competition, with the first two trials taking place on the 18th & 24th March respectively. There is every chance that one of the participants at yesterday’s Turn Up & Play could go on to these trials and be successful there, landing themselves a once in a lifetime trip to Cairo later this summer. For those who attend the trials but aren’t selected for the final eight, there are exit routes into 2TR’s academies or they are invited to take part in more Turn Up & Play events – this way 2TR ensures that everyone is rewarded for their hard work. Sheikha said a few words praising all those who had come to play, not only for their effort and performance, but for taking a positive and empowering step. With this year’s tournament in Cairo and further tournaments mooted for London and Colombia in the coming years, Sheikha was quick to encourage everyone to keep giving their best, as it could well one day change their lives.
Share